Every once in a while, I luck into discovering an upcoming book signing. It’s really very cool to meet someone who creates work you like, and it’s even cooler when that person is genuinely nice and wants to engage with their audience on a personal level. Add the option to buy a specialty beer to the mix, and you’ve got a killer way to spend part of your Saturday night.

During a previous excursion to a different New Dimension Comics location, I spotted an ad for an event for Blade’s Bloo 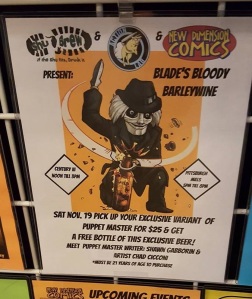 dy Barleywine. I snapped a photo and immediately sent it to my friend Megan, who is both a Puppet Master enthusiast and acting as my personal horror movie mentor. (She had recently shown me this wonderful piece of campy horror cinema, and I could tell then that this was the beginning of something awesome.)

When we arrived the night of the event, we immediately saw a table stacked with beer and comics. We knew we were in the right place.

While we couldn’t stay long—we were both starving—we got to chat for a few minutes with Gabborin about the Puppet Master series and his work with turning the much-loved movie into a series of comics. I later discovered that Gabborin is the editor-in-chief for Action Lab Comics, and between how cool he was, how awesome the comic and beer both appeared, and what Action Lab offers in terms of a catalog, I know I’ll be buying comics from them in the future.

If you don’t check out your local comic book/book stores very much, I highly recommend you do. Many of them host events like this, and you never know who you’ll get to meet. (And who doesn’t love spending absurd amounts of money on books and beer?) 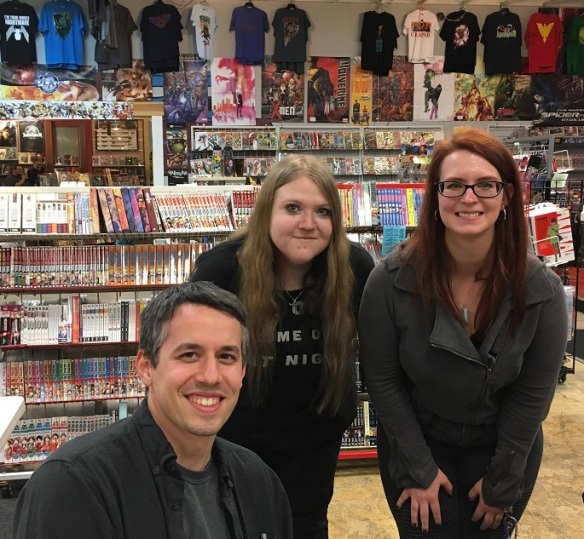