While countless movies, video games, and books have dipped into and reinterpreted parts of Norse mythology, the subject may seem a little difficult to get into. For me, I could name any number of Zeus’s infidelities, but when it came to reading anything related to the Eddas, my eyes automatically glazed over. I was definitely interested in learning about Odin’s wily ways, but I didn’t know how to approach the topic until I encountered one book in particular.

The Children of Odin by Padriac Colum

Originally written with children/young readers in mind, The Children of Odin is a fantastic

overview of some of the most iconic myths from ancient Norse culture, such as the story of Thor having to dress as a woman to get his hammer back. It’s a relatively fast read, and if you like what you read here, you’re primed and ready for more in-depth material. Or, that’s how it worked out for me.

The Norse Myths by Kevin Crossley-Holland

You’ll encounter many of the same stories you did in the first book, with the addition of

some new material such as the Hávamál, which is used as a narrative framework for this particular collection. (For those of you who don’t know, the Hávamál roughly translates to “words of the high one” or “the sayings of Har”. It is a piece that is largely attributed to Odin, which consists of advice for living, much of which is both sound and practical.)

You might be wondering what the point is in rereading the same story over and over again. While that’s a good point, in my experience it really broke down to getting familiar with the names and personalities of the gods, and reinforcing that knowledge through repeated exposure to the material. What’s interesting, though, is that these stories are told with slightly different flavors. You’re essentially getting the same story, but with slightly different artistic flair. 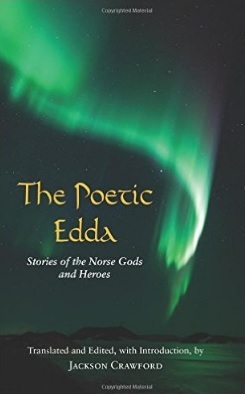 added bonus of his own creation—The Cowboy Hávamál.

What I enjoyed most about this particular translation is that the layman language allows the reader to really pick up on the humor present in many of the stories. Humor and relatability really help myth come alive.

A number of readers I have spoken with have expressed interest in Norse mythology, but haven’t been able to stick out The Poetic Edda right out of the gate. If you tackle these books over the course of a handful of months, you’ll also start to pick up on other bits and pieces, such as the depths of the personalities of the gods and what they represented. (Odin is so much more than just a “god of wisdom”.)

Obviously, you can skip any of these books and choose others! I always encourage readers to pursue what interests them most. These are just the books and the reading order I used to help me tackle Norse mythology 101. I’ve also found this method provides a pretty comprehensive platform for reading other sagas, such as Njal’s Saga and Laxdæla Saga.

(PS Do let me know if you get into different sagas! I’m always up for discussing their ideas and attitudes.)